I recently posted: “Google before you Tweet” is the new “Think before you Speak.” Since things posted on the Internet are forever, I thought I’d remind myself and others that it’s good to verify your information before pontificating. (I have snopes.com on speed dial.)

The same is true for reading the content before we share on facebook or retweet a link. Actually reading and checking what we post can preserve the illusion that we are intelligent beings.  Otherwise we risk sharing something incorrect or inappropriate or pass on, as truth,  satire from The Onion or Mooscleans. 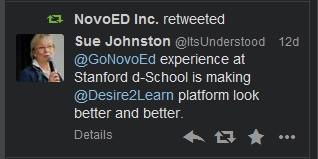 ep at the wheel when you are posting as yourself is merely embarrassing. But when you’re posting on behalf of an organization, it’s criminal not to have your brain in gear. So I was puzzled, today, to see a retweet of something I posted a couple of weeks ago.

Is this an organization rubbishing itself? Or is someone simply not reading and thinking before posting?

NovoED is the learning platform for an online course I’m taking. (A MOOC with thousands of participants.) Desire2Learn, based in my community, would seem to be a rival in the ed-tech space. (Yes, I Googled that before pontificating.) So why would NovoED repeat a plug for D2L?

END_OF_DOCUMENT_TOKEN_TO_BE_REPLACED

Digital journalism a conversation? I don’t think so

One of my intentions for 2008 is to stop reading the comments after stories in the online version of the Globe & Mail, our national newspaper. They showcase uninspired and uninspiring nonsense posted by people who seem, with a few exceptions, to be ill-informed, ethnocentric, regionally oriented and partisan conspiracy theorists hiding behind anonymity.  The outpouring of ignorance and intolerance is especially disturbing because these creatures are my fellow citizens. The news is bad enough; witnessing people at their least charitable makes it even worse.

END_OF_DOCUMENT_TOKEN_TO_BE_REPLACED

You call this entertainment?

It’s hard to be a Help Desk person. We customers only call when we’re angry or confused or both.  If only we could just learn to enjoy:

In a bid to be the “ideal customer,” I have started to use my problems as entertainment, for both myself and Help Desk employees. I had a great chat, this morning, with someone at Bell Canada. He was wonderful and had the customer service spirit so often missing in call centres.
END_OF_DOCUMENT_TOKEN_TO_BE_REPLACED

Extra: Calling Out For Service – from Voice Jail

Call anytime, but it’s better to send e-mail – Yesterday, while I sat on hold long enough to tidy my entire office, the recorded greeting told me that my bank has extended its call centre support service by two hours. Nevertheless, the recording went on to suggest sending them an e-mail for faster service. The irony is that the purpose of my call was to clarify something about online banking. Hmmm.

A friend is using the time she spends on hold to write a book – I imagine there is a statistic, somewhere, revealing that the average North American spends 1.5 months of his/her life on hold.

Would you like fries with that? – Another friend revealed today that while he was waiting for service at a technology site, the system offered him the option of waiting with or without music. I guess they didn’t read the 2002 study by France’s Université de Rennes showing that callers listening to music while on hold underestimate the length of time they’ve been waiting. Next we’ll have a choice of musical styles. But will we ever reach a human being?

Get Real – Calling Out For Customer Service

I have a lovely telephone company.  Through the magic of mergers, it’s also my mobile phone company, my Internet service provider and (if I had a TV) my cable company. Multiple services mean multiple reasons to contact its customer service line.

And there the loveliness ends. The organization that enables me to communicate with you and the rest of the universe seems intent on preventing customers from communicating with its helpful help desk.

Place a call to the customer care line and you’re connected with an interactive voice response system (IVR). In other words, a fake guy, with an incessantly cheerful recorded voice tries to guess why you’re calling. Our IVR Guy has advanced beyond the "Press 1 for billing enquiries" stage and saves you the digital wear and tear of button pushing. All you have to do is speak the right words.

Pray the situation fits the options offered. Unless he hears the magic words, this poor man apologizes. "I’m sorry," he says, "I must
have misunderstood. Can you repeat that please?" Welcome to Canada, where even our robots are polite.

Outwitting the robot – Since there’s no
officially sanctioned way to bypass IVR Guy, getting to a real person requires creativity, if not cunning.

END_OF_DOCUMENT_TOKEN_TO_BE_REPLACED

Trust me, I’m a communicator – Part 3

We are the Lens

As professional communicators, we stand between people and
information and give it shape and form. We are the lens through which
information is filtered. In most cases, whether we are journalists or
organizational commuicators, our intention is to make things clear for
our audiences.

Unfortunately, there are communicators who
distort the information. So the lens is scratched – or clouded with finger
prints – and the audience sees a fuzzy image.

The True Believer – Distortion by Accident
Try though we may, it’s unlikely that anyone can be truly impartial. Everyone’s view of the world is coloured by his or her experiences, learning and beliefs (and maybe their Meyers-Briggs Type and their astrological sign).

We imagine the truth, as we see it, is the real deal. We unintentionally distort the information we communicate  to fit our personal world view. Knowing that we all have biases that filter the way we experience, receive and transmit information, I think it makes sense to declare them up front so your audience knows the nature of the lens. But then, I’m biased. Not only am I an over-40, Honda-driving Canadian with a liberal arts education (and an ENFJ Leo), I’m a natural optimist who believes people want to be understood and believed when they communicate.

Exceptions to that cherished belief bring us to the second type of distortion.

Disintermediation and CEOs who blog
As communication professionals, we need to step up our efforts to get and share a clear picture, one that’s undistorted by accident or design. If we don’t, we risk redundancy.

Communicators are intermediaries in a world
that is, increasingly disintermediated. We once were the "source" for current and relevant information. Today, people don’t need to go to traditional
news organizations for news. They can go to the Internet. Consumers don’t have to rely on what companies tell them about their products. They can find rants, raves, and reviews of almost every product or service on the Net.

Online, they find everyone from lunatics to CEOs (and some who fit both categories) expressing their opinions on millions of topics.  When people can go right to a web site or blog and get the story (official or unofficial) for themselves, public relations people and journalists are cut out of the game. We lose the role of leading and shaping opinion.

Some might argue that’s a good thing. But, for most people, going to the Net is a bit like a walk in the dark without your glasses. You’re dazzled by the brightest and lulled into a false sense of safety by the familiar.

I’ll argue that someone needs to take on the role of discerning what’s true and presenting it to people so bombarded with information they no longer know what to believe.  That "someone" can and should be professional communicators. The trick is to demonstrate that our lens is as smudge-free as it gets. Or,  at least, declare the tint of the filter.