Don’t confuse the issue with facts! 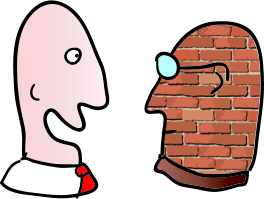 Have you ever tried to win someone over with a clear, fact-based proposal only to have them become even more fixed in their current (in your view, misguided) position?

Earlier I wrote about the resistance to give up ideas being as difficult for us as giving up more tangible things we own.

A useful variation of this notion is examined  in an essay called How Facts Backfire. by Joe Keohane in the Boston Globe.  A key insight: “In reality, we often base our opinions on our beliefs, which can have an uneasy relationship with facts.”

The essay looks at the findings of political scientist Brendon Nyhan, who studied the puzzling behaviour of people who become more entrenched in their beliefs when confronted by contradictory facts. Unfortunately, this behaviour is as common in the workplace as it is in the political arena that Nyhan examined. Our default position in the “rational” business world is to make fact-based decisions based on clear evidence. When we propose change based on the facts of a given situation we’re often puzzled when met with “irrational” resistance.

We now know what’s at work in our brains in these situations: Having to admit your current belief is wrong is a social threat. Our brains can’t distinguish between this type of threat and a physical one. Logic is overridden by emotion and the “flight or fight” response emerges as resistance to change.

This behaviour gets subtly woven into our lives as we readily accept facts and opinions that confirm our beliefs and assumptions and actively discount those that don’t.

What can we do to effectively inject facts into the equation? Here are some approaches to take the next time you seem to be talking to the wall:

Thinking is hard work and our brains are optimized to avoid it.  Filtering information through our beliefs is a key tactic to conserve energy. We need to keep this in mind when trying to change minds.