So what’s this agile coaching thing? 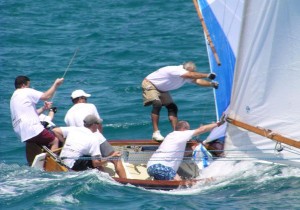 Agile is like keeping your balance when someone rocks the boat.

Every few weeks, someone I know learns what I’m up to and asks, “Who are these ‘agile coaches’ you work with?” So I try to explain. It’s not easy. But I love trying.

First I have to explain what ‘agile’ is. “It’s like the real meaning of the adjective,” I suggest. “Quick, co-ordinated, flexible, nimble. It’s like not losing your balance when the boat rocks. When we’re agile in our lives and businesses, we can adapt to changing circumstances.” They get that. They want that. We all do.

One of the businesses that’s wanted to be adaptive forever – or at least since the ’80s, when I first worked in it – is software development. In 2001, a gathering of industry luminaries set out four values and 12 principles they believed would help create better software. Today, the Agile Manifesto and Agile Principles are touchstones for thousands of teams around the world working to create products. And not just software. Marketers, HR folk, medical people and others are exploring agile methods in a bid to create better work and better workplaces.

The big deal with the Agile Manifesto is that it values people over process. In a world of unrelenting demand for things to be better, faster and cheaper, people issues plunged to the bottom of the priority pool. Processes, metrics and tools rose to the top. These are attractive to humans. We’re wired to seek predictability in times of uncertainty. These are tangible things we can see, measure and fool ourselves into thinking we can control.

People stuff, on the other hand, is untidy, unpredictable, uncomfortable. We don’t even pretend we can control people. Those who try, fail miserably. What might have worked in the industrial society, or even for our dads, will not float with today’s work force.

So along come these people who’ve adopted that agile, “people first” mind set. They talk about experimentation, self-organizing teams, collaboration, learning from failure. They deliver value to customers incrementally and often. No waiting for years for products with every imaginable feature in place, whether or not customers still want them. Agilists point to places where they’ve introduced new ways of working that discourage firefighting, last-minute heroics and adrenaline addiction and, instead, promote sane work practices. Sometimes, the agile mindset and practices can help companies bring better products to market sooner and at less cost. The evidence is there. Better work. Better workplaces. Better workers. Better products. Better service.

Their daily meetings are super short, more because they’re focused on what needs to happen next than because they don’t use chairs. Premises Department does not understand this. Agilists put sticky notes all over the walls. They may even write on the windows. More confusion for Premises. And for anyone else who doesn’t quite get what’s going on with “those funny people on the third floor.”

Some people take to these new ways of working like tadpoles take to water. Still, most take time to adapt to new roles and ways of working. The old notions of power and status seem as old-fashioned and just plain wrong as smoking on an airplane, but the habits aren’t easy to break.

Agile coaches are among the most interesting and fun people you will ever meet. They live the agile values and practise the principles. Their job is to help people make sense of the new ways of working – and then support teams as they work that way. They have process smarts, content smarts and a knack for combining those to bring out the best in people and teams.

In one day, they may facilitate several meetings, train a team in a new process or tool, mentor a new team member, coach a team that feels it’s losing momentum as well as one one that wants to sustain momentum or accelerate. They may coach an individual with a professional or interpersonal challenge and have a conversation with someone from another department to remove a roadblock for their team. Their days are full of surprises.

So how did I get mixed up with these people?

Friends in the project management world invited me to tag along to an Agile Coach Camp and I went. I rode in on my high horse ready to do battle. As a highly trained and certified professional coach who had worked in a big coaching school, I wanted to know about these dudes daring to call themselves “coaches.” It took me about five minutes to get over that and fall in love with this community of smart individuals who want to bring out the best in themselves and others.

As I got to know the agile coaches, I learned that the coaching part of their work was where they felt the least confident. That wobbly, untidy people stuff made them uncomfortable. I got to know Lyssa Adkins, author of ‘Coaching Agile Teams,’ founder of the Agile Coaching Institute, one of just a handful of people training agile coaches. “You may not be able to teach them to be agile,” she told me, “but you can teach them to coach.”

So I put together a training program with a big focus on the professional coaching skills, skills I’d practised for 10 years and had taught to others. And people came. And they learned the techniques professional coaches use. And they gained confidence. And they’re out there changing the world, one conversation at a time.

Learn about our distance learning program.
We’ll be introducing an in-person three-day program later in 2015.